House Flipping is Not For Me 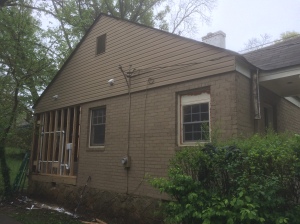 Renovating the Green on Gift home has made it very clear that I would be terrible at flipping homes for maximum profits. There may be people out there who can renovate and sell homes profitably without compromising quality, but that tends to be pretty rare. While I was house hunting, I saw many homes that were clearly renovated to sell quickly while ignoring or, most commonly, hiding major structural and building performance problems that are costly to correct down the line.

One such example of corner-cutting to save cash is the old porch that was previously discussed. During the renovation, we discovered that one of the wood framed walls of the old porch had no structural sheathing (Figure 1). In new homes, structural sheathing is generally 4’x8′ sheets of plywood or OSB installed on the exterior of the wall framing (vertical and horizontal studs). The combination of sheathing and wall framing is what gives the wall its strength. The Wood composite siding was attached directly to the wall studs and then covered with vinyl siding, which has not held up well over the years. The vinyl shows signs of melting, either from a grill or the reflection from the neighbor’s windows (Figure 2). Another wall of the old porch is finished with fiber cement siding. I don’t know why they opted to use two different types of siding, but it definitely looks junky. 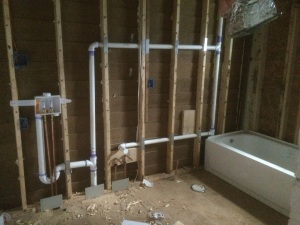 Figure 1. Interior view of original bathroom wall with new plumbing. The wood composite siding is clearly visible where structural sheathing should be located. 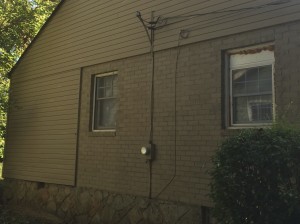 Figure 2. Exterior view of original bathroom wall. It’s hard to tell, but the vinyl siding is warped and sagging in places.

Although I wasn’t terribly concerned about the missing structural sheathing, I did want to replace the vinyl siding at some point. For better or worse, that point is now. Had I insulated the existing walls with spray foam, it would have attached directly to the interior face of the composite siding, making it difficult, if not impossible to remove later without ruining the insulation. This is a great example of a cheap workaround costing more in the long-term,  so we decided to add new structural sheathing and replace the old siding on the few wood framed exterior walls in the house (Figure 3). 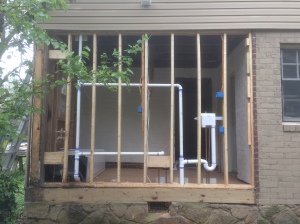 Figure 3. The gutted wall. The wall will be covered in structural sheathing, house wrap, and fiber-cement siding.

Luckily, my contractor, SawHorse, had surplus materials from other projects, including plywood, housewrap, and Hardiplank siding. Since the wall requiring replacement was not very large, this surplus material covered most of our needs. Reduce, reuse, and recycle at it’s finest!