The Green on Gift house has presented no shortage of challenges. I’ve already discussed some of the moisture problems and wall framing issues. In honor of David Lettermen’s recent retirement, here are the top 10 problems with the home’s heating, ventilation, and air conditioning (HVAC) systems. The problems range from no exhaust fan in the bathroom to a heat pump that wasn’t operational. 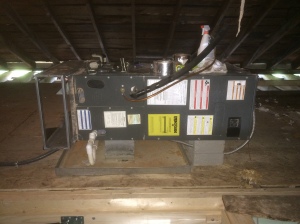 The original condensate pan only covered half the heat pump. Here are you can see the new filter cabinet being installed on the left side.

All heating and cooling systems should have a condensate pan under them to collect and remove water. My pan only covered half of the heat pump, so if there was ever a leak there is no guarantee it wouldn’t run onto the ceiling below. 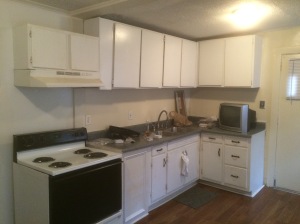 The original range hood recirculated the cook air into the kitchen and did not exhaust to the exterior.

The kitchen range was not exhausted to the exterior. This meant any smoke, water vapor, or odors were left to linger in the kitchen.

The one original bathroom did not have a bath exhaust fan, resulting in very evident mold on the ceiling and the door.

Duct systems consist of supplies, which blow air into the home, and returns that draw air out for heating or cooling. The house originally had only one return duct in the hallway. This was drastically undersized, which meant the system was starved for air and generally less effective than it should have been.

Homes, especially tight homes, need outside air (sometimes called mechanical ventilation or fresh air) to help dilute indoor pollutants and to keep the air in the home feeling fresh and not stale. While homes don’t need to “breathe,” occupants do. 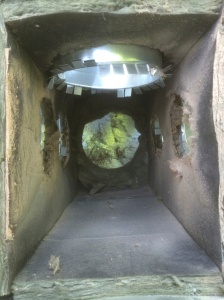 The inside liner of the ductwork was coated in a layer of dust and grime. This came from excessive duct leakage and no filter. [Wait where wasthis ductwork? the HVAC in the ceiling?]

This was one of the major leaks in the duct system with attic air being drawn directly into the system. This leakage caused the system to work harder and allowed pollutants to be drawn into the home.

The ductwork was pinched and contained lots of sharp turns. This resulted in poor airflow out of the vents into the rooms. [link to the post that explains this in more detail]

The duct leakage was literally off the charts – too high for my equipment to measure! The ductwork was very poorly sealed and one duct was completely disconnected. Heated or cooled air was being lost into the attic through leaky supply ducts and hot, dirty air was being sucked into the system through the leaky returns.

When I purchased the home, there was a thermostat that only works with furnace systems, but the house has an air source heat pump. This means the heat pump never actually ran properly.

At this point you may be asking yourself was there ANYTHING good with the existing HVAC system? Well, the heat pump itself was fairly new and in good condition, so after Sosebee Services replaced the ducts, condensate pan, and thermostat, I ended up with a pretty good system. And I can always change out the air handler and condenser later if I want to know that the whole system is working well.